"... and that's how it's done."
This page is intended as a guide for newer players.
If there is anything you are still unsure about or feel could be improved, feel free to leave a comment!

This article aims to be a comprehensive guide for the Advance Wars By Web website to help new users to get a game and start playing quickly. If you have just joined up, welcome! Those who are completely new to playing Advance Wars should see Advance Wars Overview first for a run-down of the game's basic mechanics. If you are familiar with the series and are checking out the site for the first time, the steps to go through to start playing are not too difficult or unintuitive, but it still may be helpful to read this guide and have a look at what can be done.

Regardless of your past experience, playing AW against humans is naturally much harder than playing against the computer AI. Don't lose hope if you are struggling to win games, everyone has to start somewhere! Refer to the Basic Strategy Guide for some good tips and things to consider for actually competing, and do not be afraid to ask for advice from more experienced players or your opponents either.

Links and actions (clickables) in the AWBW site are shown in bold below, note they generally show as green-type on the main website.

Before one is able to play Advance Wars by Web, a player must either create their own game or join an existing game. This article will cover the creating and joining of traditional (casual) public and private games. See Global League and Tournaments for information on joining official matches.

Joining a game is the easiest and fastest way to jump in; you are able to browse the selection of available games using the options at the top of the page. There you will find hosted games (which are created by other players, often with specific maps and rules in mind) and Z Games, which are empty games that are automatically generated every few hours using randomly selected maps and settings, and are free for anyone to join and play.

Upon finding a game to your liking, clicking Join Public Game on the list will take you to the Join Game page. After selecting your preferred Country and CO you will be put in the game, starting when the host elects to (if it is a hosted game) or whenever you and your opponent are both Ready (for Z games).

Joining a private game cannot be done through the browser like this - for private games, you will instead be given a join link by the host which will take you to the game entry screen. The process for joining private games is otherwise identical except that you will be prompted for the password set by the host to be allowed access.

Creating your own game allows you to play a game to your own tastes with any map or settings you desire. To start creating one, click the 'Create Game' link under the Games tab on the top bar of the website.

You will first be asked to select a map for the game to take place on, shown on the right. You can pick from one of your own maps, or any map from the archive of AWBW, sorted by map category (see Map Categories for an explanation of each category). Alternatively, you can skip this step by creating a game directly from a map's page by clicking Create Game option in the toolbar.

Once that is done, you will be taken to the game creation screen. Outlined below are explanations for the various options. 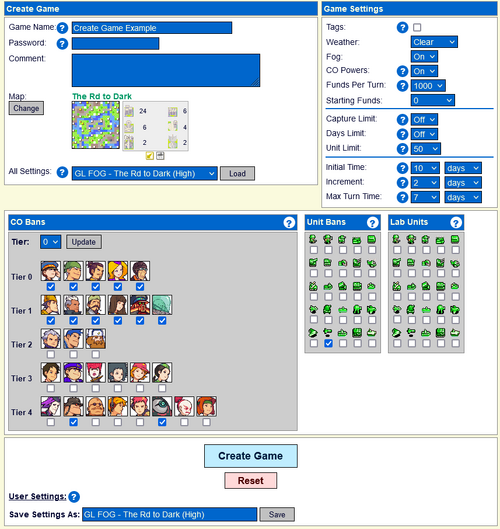 When finished, clicking Create Game will finalize most changes, and, if no password is set, post the game in Public Games.

Upon creating or joining a game, the game will be listed under "Games Waiting to Start". Here you can overview some further options before the game starts.

Viewing your active game will take you to a page that displays the game map in the center, timer and creation information at the top, the game bar above the map and the player overview to the side of the map (or below it, if the map is too large to display all at once).

To build a unit, you have to click on a production facility (Bases, Airports and Ports, and also Cities if you are Hachi with SCOP active), and select the unit you want to build. Units you can build will be unformatted. Units you cannot afford will be in black and crossed out, greyed out units are units that you can only build if you own a Lab, and units that have been banned will not appear at all.

The funds required to build the unit will be deducted from your "Funds" shown next to your CO portrait.

Games are played in AWBW purely through mouse commands - no downloads or scripts are required to use the site. Clicking a unit will activate commands for that unit, and the game will highlight all the valid tiles the unit can move to. To move a unit, simply click on the tile you would like it to move to, or if you need it to stay in place, click on the unit twice. If you need to cancel your order, click outside the valid area or the menu.

Moving to a tile requires a path the unit must travel along, shown as a red arrow. If it is not otherwise specified, the game will generate one automatically for you. You can specify a path manually (generally useful only in Fog of War or for fuel conservation) by dragging the cursor along the route you would like it to take, provided the unit has enough movement to make it and it is not blocked by terrain or enemy units. For mobile devices, you can click and drag to achieve the same effect.

Once you have picked a tile or chosen to stay put with a unit you must specify the next action before the unit will proceed:

In the game options above the main playing area of a page, you'll see several options: Zoom In/Out, the Game Menu, Pause Timer, Messages, Damage Calculator, Move Planner, Replay, Toggle Follow, Tag CO (only if tag powers are on) and End Turn. In the Game Menu, you will see Resign, Set Draw, Info, View and Stats.

COs (with the exception of Von Bolt) have a 2-part CO bar, a shorter one with small boxes that informs the CO Power, and the longer one with large boxes comprising the Super CO Power. These will fill up as you deal and take damage, with every 9000 funds worth of damage taken comprising one segment and damage dealt worth half of that. Once you have dealt or taken enough damage to fill your CO meter to the proper level, the bar will begin to shake and a button will appear that allows you to activate your COP and SCOP.

If you can use your COP, a

box with a gold star appears next to the power meter which can be clicked at any time during your turn to activate it. If you can use your SCOP, a

box with 3 stars appears which is activated in the same way. A CO with the CO power or Super CO Power activated will have their power bar temporarily replaced for its duration, and their overview is outlined by a red or blue box, respectively.

After you have completed all your actions and passed the turn to your opponent, be patient! AWBW is built around a similar concept to 'mail chess' where players may take five minutes, an hour, a day or even longer to finish their turn. If you are lucky, your opponent may be online and you can both play out your turns in near real-time, sometimes called a Live Game, but generally, especially if your opponent is in a very different time zone, it is expected to take some time for turns to play out.

Luckily, however, unlike in the original games, you are not limited to playing only one match at a time; in AWBW, the norm is to play many games simultaneously. Taking your turn on one game can take 5 minutes or more depending on how complex the game is and how much you like to think! So even if you only have an hour available every couple of days to spend on the game, then you could reasonably join and be able to play 5 or 6 games at once. When it is your turn for a game, you will be given a notification in the website interface and it will appear in the list of games on the Your Turn page.

Be wary of your game timer and especially your Max Turn Time if you cannot be online regularly. If you know you will be inactive for some time, you can enable Vacation mode in your profile settings to temporarily disable your turn time limit for all games for up to 2 weeks or until you begin taking actions again.

AWBW also includes email and Discord integration to allow a notification to be sent to you via these methods whenever it is your turn, even if you are not currently on the website. You may do so in your settings page: 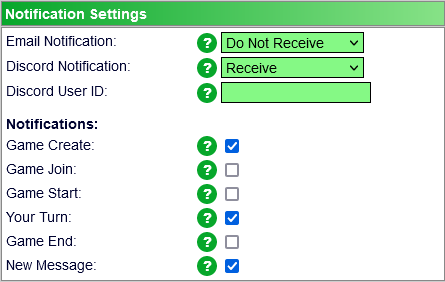 The email used is the one associated with your AWBW account, or the one you signed up with.

Discord notifications will require joining the AWBW Discord server and are sent via a @mention courtesy of Nell Bot in the dedicated #site_notifications channel, along with a link to the game/lobby in question. Integration requires your unique Discord ID - note that this is not the same as your username, but a unique 18-digit number that is normally not visible to you. You can find it by querying a bot with the associated !userid command in the server or using Discord's integrated development tools.

You may also wish to use the Design Maps feature. To create playable maps, at least some playing experience is very useful, but there are many elements to mapping that are not immediately obvious from just play alone.

Designing competitive maps and especially League-quality maps is not so easy. They need to be balanced, stable, and not too easily drawn/stalemated, with appropriate consideration given to FTA. Expect comments after you publish your maps! Take the criticism in good humor if you can, say you are new and ask for constructive advice in the comments below your new map. If you are making some kind of weird or specialty map, it's a good idea to say so in a comment below your map before publishing, simply click on the map title while in "map edit" or in the Your Maps page.

To get advice on making better maps, see the relevant AWBW guides sections and discuss with other users in comments, on the forum and the Discord server. Map Committee members in particular are recognized as reliable and friendly sources of good advice regarding map design.

Community content is available under CC-BY-SA unless otherwise noted.
Advertisement